Chabeuil, half-way between Provence and the Vercors, is the perfect place to recharge your batteries! Capital of the regional meat dish caillette.

During feudal times, Chabeuil was part of the possessions of the prince of Royans,
In 1247, Chabeuil passed to the Dolphins of Viennois.

In the 13th century, Chabeuil had a hospital which gave its name to the district located on the right bank of the Véore, a very commercial district since the beginning of the 20th century.

In 1349, the Dauphiné was attached to France, Chabeuil then depended on the Dauphin Louis, future Louis XI, then on the king.

During the war against Spain, Louis XIV - for reasons of alliance - offered the Prince of Monaco, the city of Chabeuil which became Monegasque until the Revolution of 1789. You can admire today the Hotel des Grimaldi with its very well preserved dungeon.

At the end of the 19th century, Chabeuil prospered thanks to the flourishing activities in the fields: rural, commercial (trading in silkworms, wines ...), industrial (spinning mills, stationery, oil mill) and artisanal (mills, sawmills).

Several architectural elements are worth a detour:
- The town hall :
Designed by Lyon architect Tracol, completed in 1881, is in the neo-Gothic style. It is built in Peyrus stone (village in the canton). The bell tower was built in 1903, inspired by the Palazzo Vecchio in Florence. The relative wealth of the building undoubtedly corresponded to a desire for prestige, because Chabeuil then had a prosperous activity thanks to its industries and its trade. The tower, to the left of the town hall, is one of the rare elements remaining from the old ramparts.

- The monumental gate:
The centerpiece of an ensemble of which only the porch remains, it is built on a Gallo-Roman foundation. The overhang of the summit is more recent.
This door was externally provided with a four-sided roof. The arrangement of the fittings and grooves of the stone show that this door was once defended by a harrow. The arms of the Princes of Monaco were carved on the city's three existing gates.

- The "Montée du BARDA", so named according to tradition, because of the Dragons who passed there with their barda to join their cantonment; this covered staircase keeps intact the picturesque charm of the old streets of Chabeuil. On the left, at the bottom end of this path, you can see the "Place du Four Banal" where the locals used to come to bake their bread and quail.

- The former Ursuline convent:
In rue Mazet, the former Ursuline convent is remarkable for its Louis XIII-style door, made of molasse, framed by two pilasters and surmounted by a pediment in a lowered arch dominated by a very altered cartouche.
The Convent was founded in 1602 by two Ursulines from Avignon, Marguerite Vigier and Sibille Buissy, whom César du Bus, superior of Doctrines d'Avignon and founder of our college, brought to Chabeuil for the education of young girls.

- Saint-Jean Church:
It was built in 1862 in the shape of a Greek cross on the rubble of the old parish church of Saint-Andéol.
The bell tower is the last vestige of this church. Bell tower type porch which allowed access to the church, it was provided with a roof flanked by four pinnacles and surmounted by an arrow carrying a huge rooster. Open summer from July 3 to August 31 every day except Saturday and Sunday from 4 p.m. to 6.30 p.m. and Tuesday from 10.30 a.m. to 12.30 p.m. and from 4 p.m. to 6.30 p.m.

- The Mazet fountain:
Rue des Remparts has kept vestiges of our fortifications with open walkways. On the opposite side, the modern temple (1973) replaces the old temple inaugurated in 1857.

In front of this temple, the Place du Chaffal or the "Petit Nice" is so named because of its microclimate. At the beginning of the century, the town installed a terrace with balusters and a fountain in gratitude to its benefactor Jean-Baptiste Mazet. 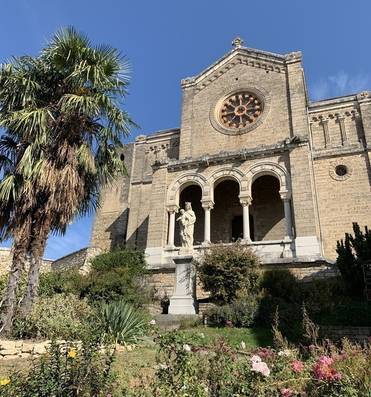 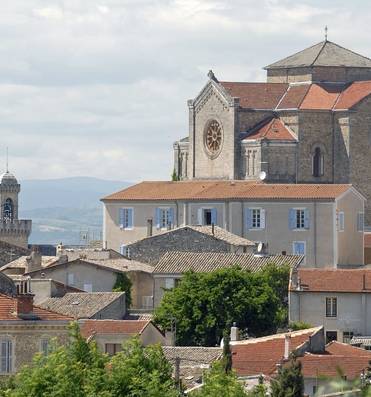 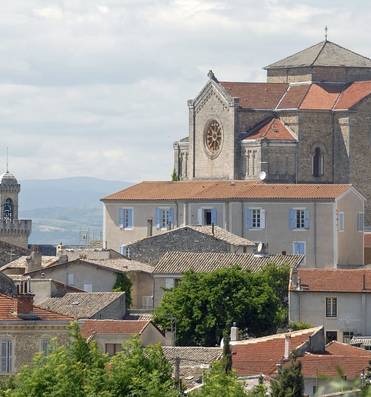 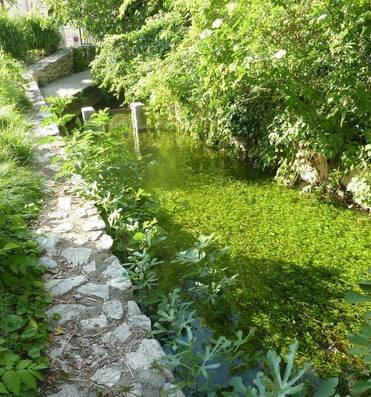 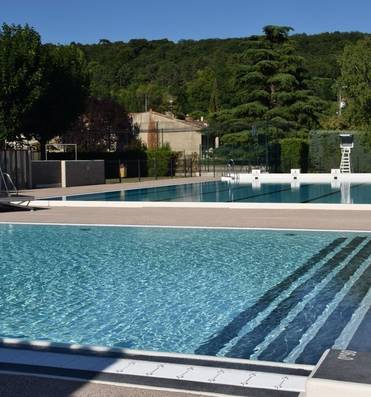