A village built at the foot of the molasse hills bordering the Isère Valley, the name Mours refers to the marshes that were once present, when the capricious torrent of the Savasse River sent its waters as far as Romans. The village is the centre of the "Sacred Paths", secular and then sacred routes traced out by mankind over the course of time.
At the top of the Saint-Eusèbe hillside, a magnificent panoramic viewing point allows you to admire the region, from the Vivarais Mountains to the Pre-Alps in the east. In about 1870, various Roman remains were discovered on these hill slopes.
For certain historians, the cupped stone discovered at the top of the hillside testifies to the existence of ancient pagan worship on the hill. This "Saint-Eusèbe stone" is a large molasse block hollowed out into three rows, each of three cups. According to ancient testimony, the rainwater that can be drunk from the cups used to cure colic. The same effect was supposedly achieved by substituting wine for water. According to another version, the cupped stone served as a beacon to guide travellers at the crossroads between the Tain-Grenoble and Avignon-Vienne routes.
Legend tells that in the Middle Ages the sorcerers of the Dauphinate and the Vivarais would meet on the hilltop to hold their annual sabbath on Mid-Summer's Eve. There they would exchange secret formulae, black magic recipes and evil spells… Other local meetings reserved for the sorcerers of Peyrins, Saint-Ange and Génissieux would take place there on the first Wednesday and Friday of each month.

Notre-Dame Church: Mentioned as early as 1097, from the Romanesque era it has retained its church tower, whose porch is listed as a Historic Monument, and a section of the southern wall of the nave. It houses the Museum of Sacred Art whose collection, comprising more than 20,000 exhibits, has won the recognition of the French Museums Directorate.
The Chalaire manor house and its tower: The spiritual home of the Dauphinate, between 1450 and 1455 it was frequented by the Dauphin ("Crown Prince"), before he became King Louis XI of France in 1461.
The cupped stone: It is now to be found in the square in front of the church. 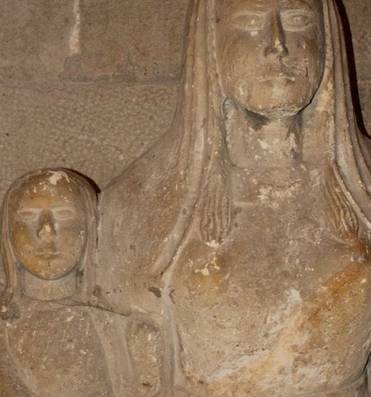